Straining yogurt produces süzme, a thick, creamy yogurt that can be spread on bread or mixed with cold water and salt to make a refreshing summer drink called süzmeçal. Like gatyk, süzme is used as a topping for soups, pasta dishes and dumplings. 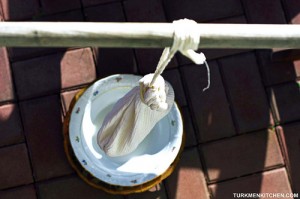 – You can also strain your yogurt with a mesh strainer lined with a kitchen towel. Place the strainer over a bowl, or gather the ends of the towel, make a knot and hang from the tap.

– The liquid (whey) that collects in the bowl can be used instead of water when making bread.