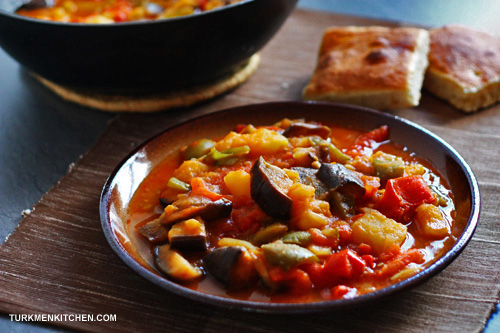 Batyrma is a flavorful dish that comprises summer’s best vegetables, which is why it’s such a popular choice among Turkmens during the summer. Similar to ratatouille, its key ingredients are ripe tomatoes, bell peppers, eggplant and onion. The name of the dish comes from the Turkmen word batyrmak, which means “to dip”. As the name suggests, you eat batyrma by dipping chunks of bread into the stew.

Notes:
Feel free to omit the potatoes or add other ingredients, such as zucchini, eggs, meat or gowurdak.